Waakye (Ghana) Recipe
Waakye is a traditional Ghanaian dish of cooked rice, beans, and dry sorghum leaves which give this dish the particular reddish color.
Check out this recipe

Cachupa Rica (Cape Verde) Recipe
The preparation can be an authentic ritual, starting the day before with the placing of hominy and beans in warm water. Yams, chicken and sausages, bay leaves, and sweet potatoes, and other ingredients that give life to this recipe.
Check out this recipe

Poulet Yassa (Senegalese Chicken) Recipe
A popular, Senegalese dish, this tender chicken is marinated in an onion-lemon-vinegar mixture that then cooks down into a completely delectable sauce that is amazing.
Check out this recipe

Nigerian Moi Moi Recipe
This recipe makes a delicious savory moi moi. Soft and moist but not mushy. It is firm enough to hold its shape. I’m sure you will love it!
Check out this recipe

Meat and Okra Sauce
Meat and okra sauce is made up of okra, onions, garlic, tomatoes or tomato paste, and meat. The ingredients except okra are cooked together until meat turns soft by a long and deep simmer. Okra will be added last
Check out this recipe

Squash Peanut Soup Recipe
Instead of using peanut butter that likes other conventional recipes, this recipe uses roasted peanuts to enhance the delicious flavor of the dish. So you don't need to cost to buy peanut butter. Compared to other versions, this version is both more economical and simpler.
Check out this recipe

Pili Pili Sauce Recipe
This pili pili sauce is easy to make at home using a few simple ingredients. It's also a great alternative to the traditional hot sauce you'll find in restaurants. In addition to being a great alternative to spicy, sour hot sauce, pilipili is a unique and tasty condiment that will spice up your food.
Check out this recipe

West African Egusi Soup
Egusi is a West Africa name for the seeds of plants like squash, melons, and gourds that, when dried and ground become a staple ingredient in many African Dishes. For this recipe, this Egusi soup is thickened with ground egusi and contains some vegetables such as tomato patse, onion, red palm oil,...
Check out this recipe

Although West African food is increasingly appreciated by international diners, some visitors still feel alienated from the culinary culture of this land. Many scientists asserted that West African cuisine might emerge about 4,000 BCE when the first West African tribe appeared. Also, many guesses suppose that the popularly indigenous vegetables and spices might have existed there thousands of years ago. 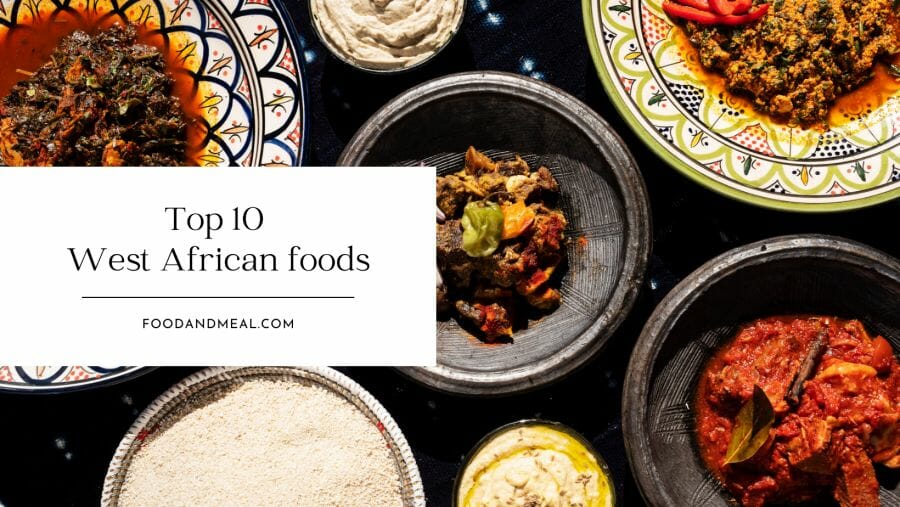 Africa is known for its intense colonial period; however, its traditional cuisine still exists tenaciously despite the influence of colonization and migration happening long ago. When the European colonists brought new ingredients to the West African region, these ingredients began to be consumed widely, but this could not impact strongly the cooking techniques of the local people here.

During this period, the exchange of trade between the peoples of West Africa with European and Mediterranean countries made tomatoes, peppers, and peanuts appear more and more in West Africa. As a result, they become the key ingredients in the daily diet of the local people today.

What do West Africans love to eat?

Compared to North African cuisine, Spices in West African food are less outstanding. The local people primarily use chili and bouillon to add their dishes. Some chefs in the local restaurants also apply ginger, coriander, or thyme to the food savingly but intentionally. West African people especially love to eat spicily, so you can see the conventional meals here fill up with red and hot dishes.

As mentioned above, chili arrived in the region by the way of European explorers; therefore, it plays an important role in Western Africa’s diet. West Africa’s spicy eating habits are also a way for them to cope with the hot and dry climate here. Because many people find that eating spicy foods can help them cool down by producing more sweat.

Besides, in West African food, the local people favorite to add the seeds of Guinea pepper – also called grains of paradise. This kind of seed has the shape of peppercorn and the pungent flavor intermingled the taste of coriander and cardamom. It is often incorporated into stews, soups, and spice rubs. 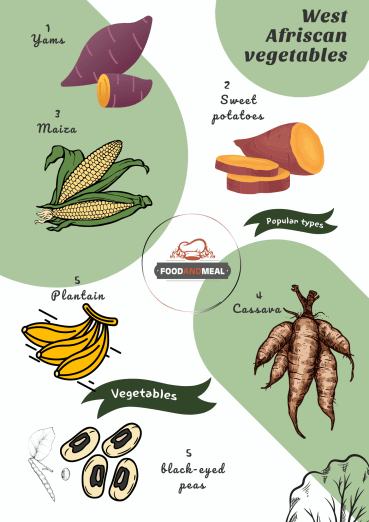 Vegetables are indispensable ingredients in African traditional meals. Previously, in contrast to Southern African, Western people ate more vegetables than meat. However, they tend to consume more meat today. Even they consume more salt and fats. Yams, maiza, sweet potatoes, plantain, and cassava are some popular vegetables always present on the dinner table of West African. In which, cassava and the fruit of plantain are two primary staves of their life.

Because of such popular consumption and appropriate climate, these kinds of vegetables are grown widely. They are usually boiled and then pounded into a thick starchy paste called fufu. Another vegetable food that should be mentioned here is black-eyed pea. This pea is distinguished by its white shell with a black dot resembling an eye. It is usually served with rice or araka fried dishes.

Chicken is the most common meat you will come across in West African food. Chicken eggs are also consumed a lot here and it is a primary source of protein for the local people. Beef, pork, and mutton also occupy a not small part of the daily portion of West African.

In Nigeria, barbecued meat skewers are especially common. Especially, suya – a grilled spicy meat dish is a staple of West African food and is an iconic street food of the region. It consists of thinly sliced meat, marinated in a variety of spices, and served with a thick peanut sauce. Traditionally, suya is accompanied by fufu

Fish is a food loved by most countries around the world and Western African countries are no exception. It is indispensable in the daily diet of the local people here, accounting for around ⅔ of all animal protein consumed. West African seafood is so prevalent that it accounts for a quarter of the total national workforce employed in the industry. 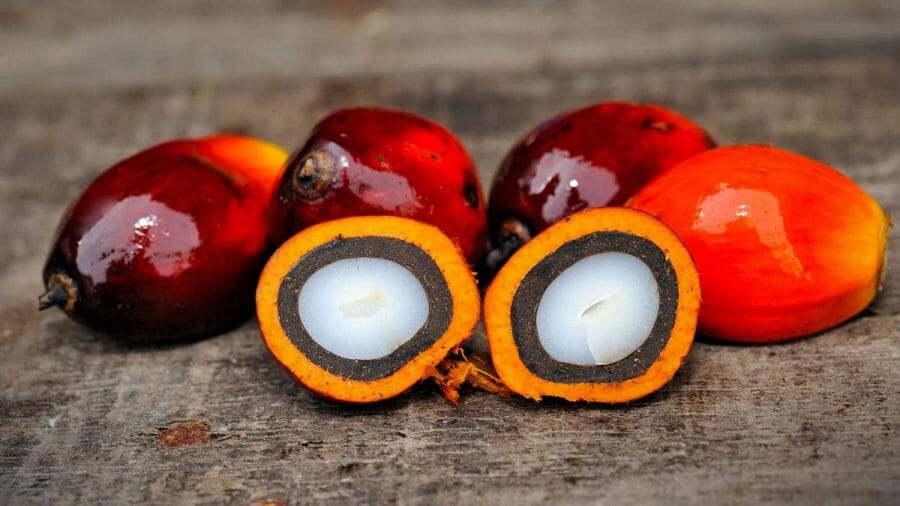 Red palm oil and groundnut oil are the two most commonly used fats in West African cooking. Red palm oil is used to cook stews, both for the purpose of creating a special flavor and for creating an eye-catching color for the dish. Peanuts are commonly used in boiled dishes, stews, or used to make sauces. Peanut head is used in fried foods because its boiling point is higher than that of red palm oil. 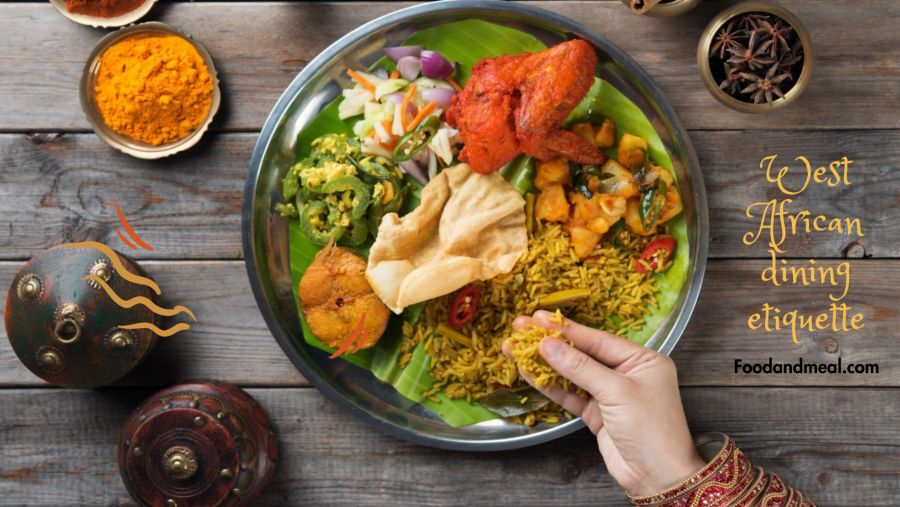 In West African food culture, the local people have communal eating habits. Instead of using knives and forks like in Western countries, or chopsticks like Asians, West Africans use their hands to eat.

In this land, water has a great ceremonial significance, so it is the first thing that a West African host invites his or her guests to.

Family members must be polite and respectful when eating. Do not eat too fast or too slow.

In West African food, especially in Nigerian culture, it is wrong to use the left hand to eat or even touch the table. Because it is believed that the left hand is associated with disrespect and wrong things. In addition, the left hand is often used for dirty cleaning tasks, so it should be in contact with food.

Featured by 16 countries, over 38 ethnicities, and many tribes spanning across most of the land, the West African foods become plentiful from cooking techniques, preparations, choices of ingredients, or even names of dishes. West African food recipes are plant-friendly because most used ingredients can be found in this area.

Indigenous peoples attach great importance to dishes with complex flavors. Many kinds of food are even needed to plan to cook in advance because they take a lot of time for preparations. Some take a long time to be cooked, and you may encounter challenges in cooking techniques if not well explained.

Indigenous legumes especially tend to become stars of many dishes. And the stews are popular. Tomatoes, both indigenous and imported spices, and ginger are used much in the West African authentic recipes. Indeed, it takes time to fully explore the whole of West Africa food. Just one post is not enough to describe. So we will dig deeper into this in another post and give you a complete collection. But first, make sure you have read through this collection of 10 dishes!