To those who didn’t know, Bharwan Dum Aloo is a recipe that is actually made of potatoes that were stuffed with paneer and seasoned with the necessary spices before being cooked in rich and thick gravy. This recipe also compliments with both Tandoori roti and jeera rice.

How to Cook Bharwan Dum Aloo?

The procedure includes scooping some of the potatoes inside contents in order to make space for the stuffing. A small spoon or even a melon scooper can be used in order to achieve this.

For the Potatoes and Stuffing

Next, prepare the stuffing by boiling or pressure-cooking the scooped potato insides. When done, combine it with paneer along with the spices then mix it well. Stuffed the newly-made mixture inside the hollowed potatoes.

In an oil-heated pan, add the whole spices and let it sizzle for a while. After that, add the crushed ginger and garlic then saute it for at least a minute. Add crushed onions and cook until it becomes light brown before adding the tomato puree.

Once the oil starts to separate from the tomato puree, add the cashew paste and cook for two minutes. Add the spices and mix before discarding the whole ones. Pour water according to how thick you want the gravy to become and let it boil before adding some Kasoori methi and stuffed potatoes.

Once cooked, remove from heat and add some cream and chopped coriander leaves before serving. 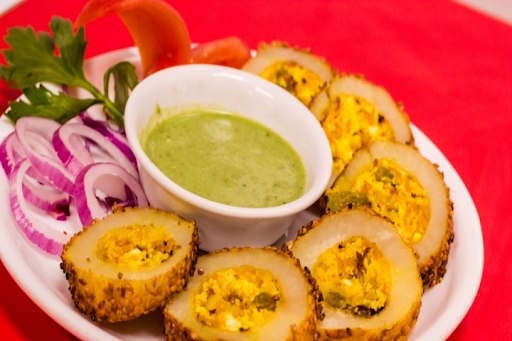