As fat and protein, carbohydrates play a vital role in the daily nutrition diet of the body. According to the US Food & Drug Administration (FDA), carbs occupy 40-65% of the total of your daily calories. It means that in the total 2000 calories you consume every day, there are around 900-1,300 calories from carbs. However, too many carbs are intaken can cause a negative impact on your body. So, what are those impacts? And what are high carb foods to avoid? Read all this blog, you will have the answer right away!

How do high carb foods badly affect your body?

In all situations, Glycemic Index (GI) is often concerned most after eating dishes containing carbs. It is because carbs play an important role in producing insulin from the pancreas. To be more specific, after enjoying a carb-rich meal, blood sugar content increases, which stimulates the production of insulin. Insulin is a “super” hormone that plays many important roles in the body. One of them is to catalyze the transport of glucose from the blood into cells, reducing blood glucose levels, helping blood sugar return to normal.

The more carbs are intaken to the body, the more insulin is released by the pancreas. Thus, if you eat too many high carb foods, it can cause anti-insulin, which leads to hyperinsulinemia – a situation that the insulin level in blood is too high.

When too much insulin is released, it will synthesize and reserve more fat (from the exceeded carbohydrate) and reduce fat burning. Thereby, the hazard of being overweight and obese is high. Moreover, by the time, the pancreas is over overloaded. Your pancreas is hurt at this time, then it immediately gets “sick” and “strike”. I mean its function is reduced and you can get some severe problems relating to the pancreas; two of the most worrisome problems are pancreatic cancer and an uncontrollable increase in blood sugar. These are the reasons for diseases relating to diabetes type II. 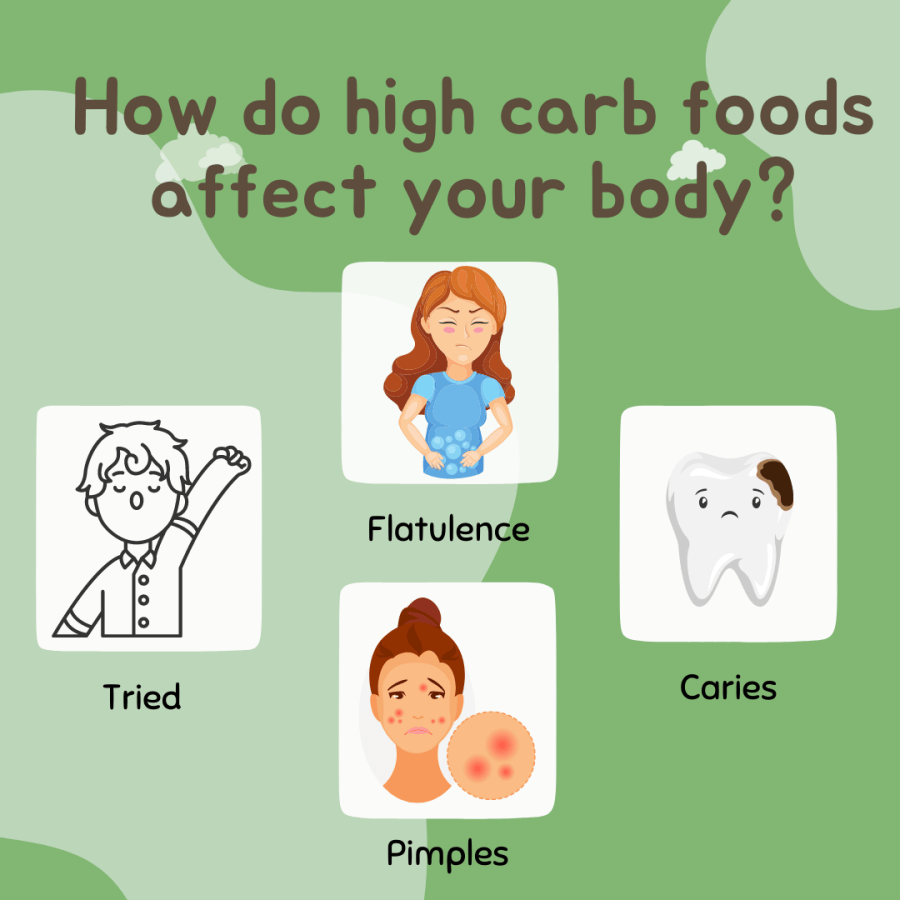 Besides high blood sugar and being overweight, intaking too many high carb foods can lead to different consequences such as:

According to the American Heart Association (AHA), The National Center for Biotechnology Information, and Harvard Medical School, after eating a carbs-rich meal, you may feel sleepy right away. It’s because that carbohydrate level will increase the GI, which makes you feel a lack of energy, tired, or exhausted. Nevertheless, AHA explored that you can usually feel thirsty if you eat too many high carb foods.

According to Marina Yuabova, an Associate Professor at New York University, sugar created from carbs can affect negatively the normal development of beneficial bacteria in the intestinal tract, making the digestion system operate ineffectively, thereby you feel flatulence. Besides, the Canadian Digestive System Research Association reckons that bacteria in the colon ferment fiber, starch, and some sugars (released from carbs)  into gaseous compounds in the body. Therefore, you may feel flatulent if eating many high carb foods

According to The American Journal of Clinical Nutrition, high carb foods are disintegrated into Monosaccharides by the enzyme in the slaver. Bacteria in the mouth will eat this sugar and produce acids that affect the pH of plaque, causing demineralization and leading to trigger decay. Therefore, it is necessary to brush your teeth a few minutes after eating, especially when using high carb foods.

Many researchers showed that people who regularly tolerate refined sugar have a 30% higher risk of acne. This risk may be caused by the influence of complex carbohydrates on blood sugar and insulin.

Refined carbohydrates are quickly absorbed into the bloodstream, causing a rapid rise in blood sugar. As blood sugar rises, insulin levels also rise to help get blood sugar out of your body. However, high insulin levels are not good for people with acne because insulin levels contribute to acne development by making skin cells grow faster and increasing sebum production in pores. 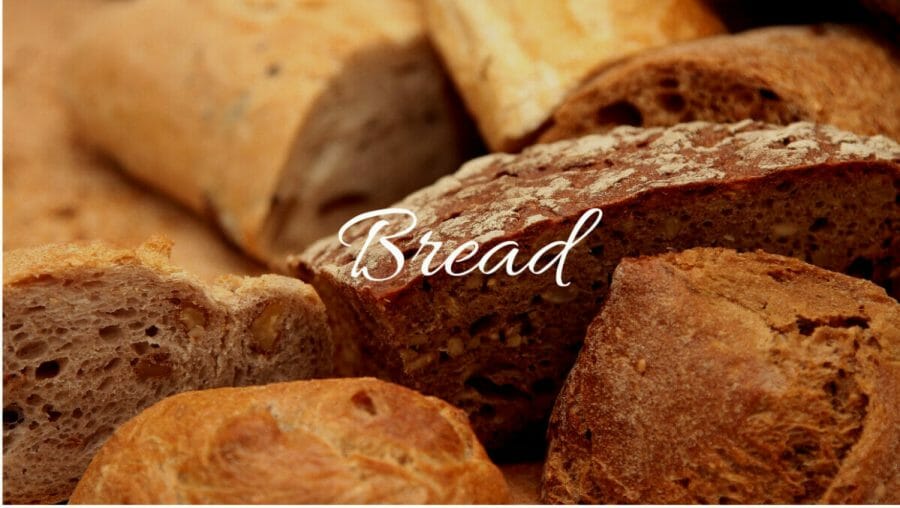 Needn’t fussy, just 2 slices of bread, you can have enough energy for all morning time. Thus, pieces of bread seem to be the best choice for most of you – my readers! However, you shouldn’t be unreal about the power of slices of bread you eat every day. They are not useful like you think because they are high carb foods. According to Dana Greene, a nutritionist of Boston said that about 500 calories and 50 grams of carbohydrate are contained in a bagel. Of course, the bigger the bagel is, there more amount of carbohydrate grams and calories it contains.

There are various types of bread, such as loaves, rolls, bagels, slices of bread, etc. all of them are high in carbs, regardless of whole wheat bread or bread made from wheat flour. 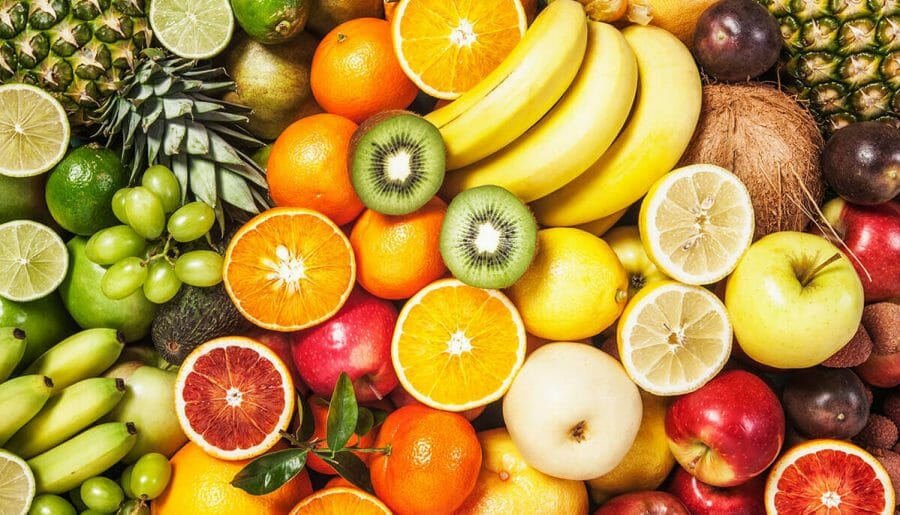 Yes, fruit juice is being a trend, but it’s a good source of carbohydrates, but they should be avoided. These are high carb foods that contain a lot of sugar. In addition, they contain fast-digesting carbs. In fact, one glass of apple or grape juice can contain as many as 48 grams of carbohydrates. Pay attention to this!

If you are addicted to fruits, you can eat some succulent fruits that have less sugar and much fiber like blueberry, grapes, strawberry, etc. And enough amount about 50 grams is totally suitable for your low-carb diet. 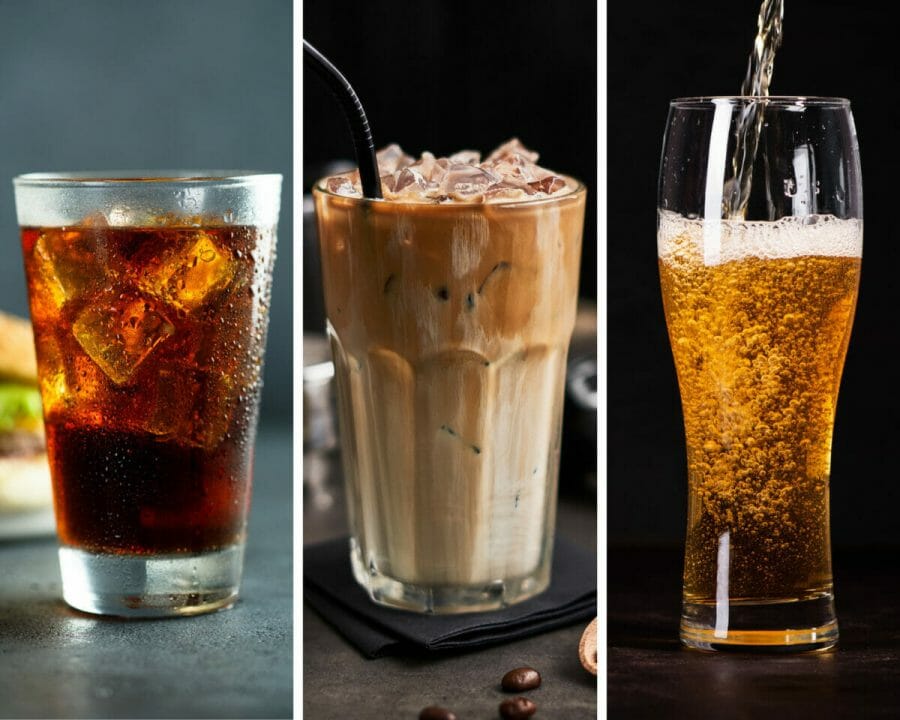 Sweetened soda, sugar coffee, and beer are also listed as high carb foods to avoid. According to nutritionist and fitness trainer – Zarabi supposed that sweetened soda is listed in drinks containing dangerous carbs. She said that a can of Coke can contain 39 grams of carbs, in which at least 150 grams of empty calories.

Beer is also a high-carb drink that you should avoid if you are pursuing a low-carb diet. Averagely, a can of beer can contain 13 carb grams, even low-alcohol beer can contain 9 carb grams per can. Moreover, many researchers discovered that carbohydrates in drinks are easier to gain weight than that in solid foods. 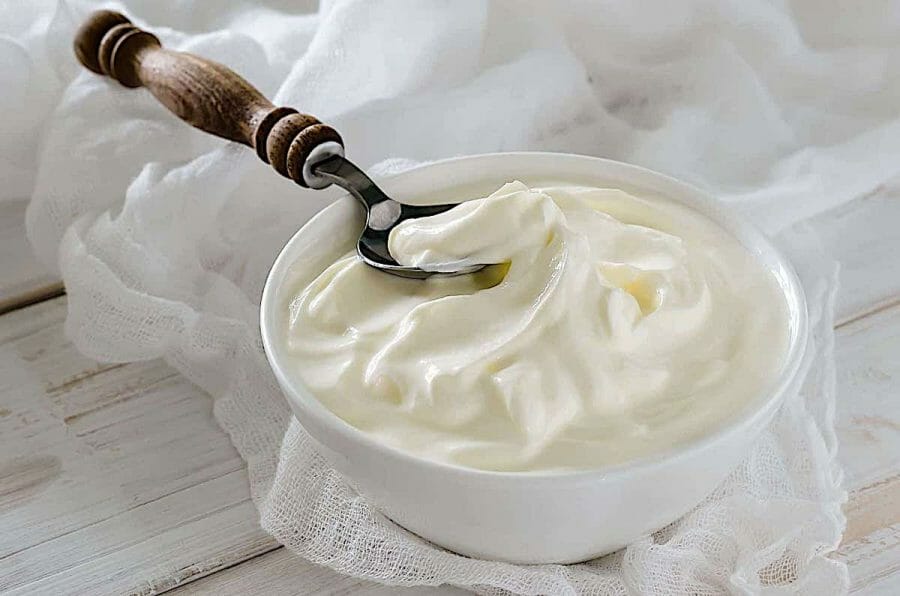 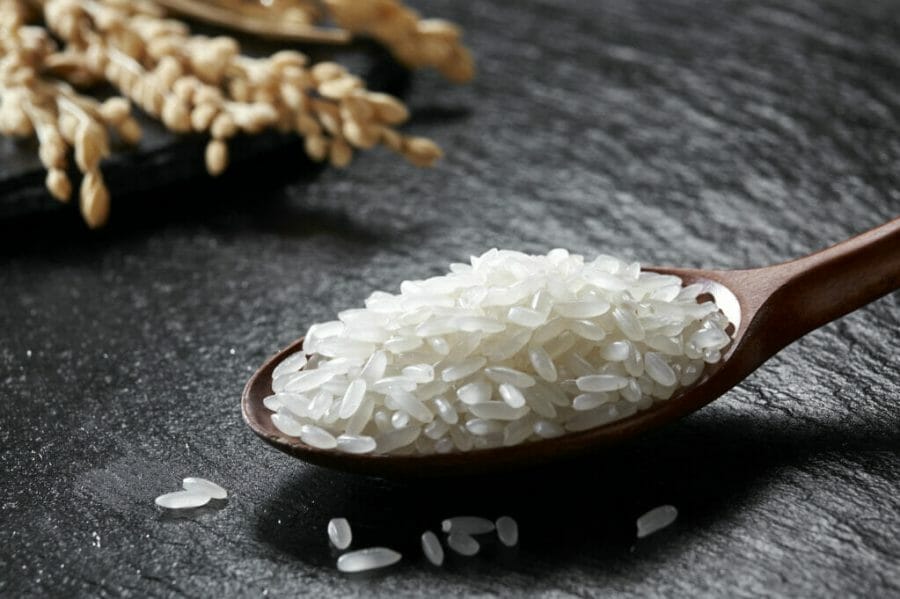 One of the highest calorie foods is white rice, and that’s on the top of the list of high carb foods. White rice has more simple carbohydrates than brown rice, which makes it an unhealthy choice for weight gain. In addition to being unhealthy, white-raised rice loses the bran and germ, which contain the most vitamins and minerals. I recommend that brown rice, wild rice, and quinoa are healthier alternatives to white rice. Or whole-grain bread and pasta are also smart substitutions you should consider

In general, the high carb foods to avoid are those that contain refined sugar. These include products like bread products, soft pretzels, and rice. As you can see, refined carbohydrates are unhealthy. For this reason, they should be avoided as much as possible. If you must eat high carb foods, you should choose healthy options. For example, you can choose a salad made of lettuce instead of a tortilla,…

Hope you enjoy this post. If you have any questions, please leave a comment below, I will answer you as earliest as possible! Take care!